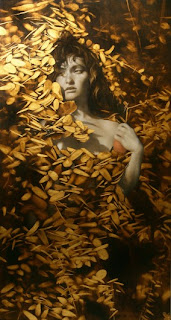 Born in rural Pennsylvania, Brad Kunkle
spent his younger years exploring and
romanticizing the beauty of the sparse
countryside and the deep forests around
him. From an early age he was drawn to
the worlds of Maxfield Parrish and the
Pre-Raphaelites —worlds, he says,
“where a subtle, supernatural beauty
seems to be hiding under the breath of
women —worlds where something
beyond our natural perception is waiting
to be found.”
Brad graduated with a degree in fine arts
from Kutztown University, studying
mostly under George Sorrels, who was
taught by a pupil of the 19th century
Academic painter, William Adolphe
Bougereau. In an effort to discover his
own artistic sensibilities, he worked as a
commission-based portraitist, and began
an almost decade-long journey of
continued self-instruction and
independent study. As a decorative
painter in his mid twenties, he leafed
entire walls in copper. He was beguiled
by the shifting, life-like nature of the
surfaces, and began to incorporate
gilding in his work. This proved to fulfill
the unreal quality he had been looking for
to convey his moody, romantic ideas of
human nature and ritual. In an old
wooden box that holds his paints, he
keeps a slip of paper with a quote from
Pablo Picasso. “You must always work
not just within but below your means. If
you can handle three elements, handle
only two. If you can handle ten, handle
only five. In that way, the ones you do
handle, you handle with such ease, more
mastery and you create a feeling of
strength in reserve.”
Posted by STEVE CROSS at 11:15 PM No comments:

STEVE CROSS
Steve Cross is a passionate and obsessive documenter of the world around him. Since the early 1980s, where he honed his artistic craft on the bare-faced walls of suburban Perth, Steve has obsessively painted, drawn, sprayed and photographed the world around him. Heavily involved in the street art scene in Australia, Steve has always been inspired by the urban landscape, a passion that has found a place in his textured, layered and collaged works on canvas. Now an in-demand painter and illustrator, Steve is also a tattooist and in 2007 co-founded Korpus Studio in Brunswick, Melbourne. He can be found there most days - coffee in hand.