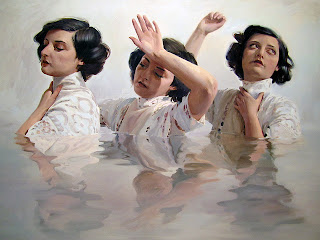 Korin Faught was born in Arizona and raised in Colorado. She relocated to Los Angeles in 1999 where she attended Art Center College of Design a year later. Winning scholarship and acclaim from her fellow students and faculty, Korin studied under painters Aaron Smith, David Luce and Michael Hussar who continue to be major influences on her work. Since receiving her BFA in 2004, Korin has been concentrating on commissions and gallery work. Her paintings have been included group exhibitions at numerous galleries including The Shooting Gallery, Copro Nason, M Modern and X-Space Gallery in Toronto, Canada.
Posted by STEVE CROSS at 11:15 PM

STEVE CROSS
Steve Cross is a passionate and obsessive documenter of the world around him. Since the early 1980s, where he honed his artistic craft on the bare-faced walls of suburban Perth, Steve has obsessively painted, drawn, sprayed and photographed the world around him. Heavily involved in the street art scene in Australia, Steve has always been inspired by the urban landscape, a passion that has found a place in his textured, layered and collaged works on canvas. Now an in-demand painter and illustrator, Steve is also a tattooist and in 2007 co-founded Korpus Studio in Brunswick, Melbourne. He can be found there most days - coffee in hand.